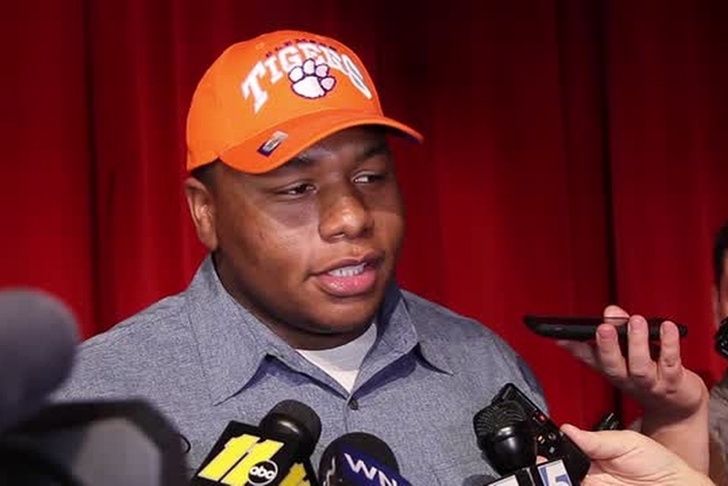 Want an idea about just how much of a two-team show the ACC is right now? The national runner-up Clemson Tigers and perennial championship-contending Florida State Seminoles account for 13 of the 14 top 2016 recruits signed by ACC schools for the 2016 recruiting cycle.

Who's the lone defector? Which names should Clemson & FSU fans look out for when spring practice gets underway? Let's get started with our top-14 countdown.

(All rankings courtesy of the fine folks over at 247Sports!)

14. OLB Josh Brown, Florida State Seminoles
Every prospect on this countdown cracks 247Sports' over Top 100 for the recruiting cycle, and Brown's our lead-off man at #100. He's a bit undersized, but he's both versatile and athletic enough to do damage in a variety of ways.

13. OT Josh Ball, Florida State Seminoles
Ball slots just one rung above Brown at #99, ranking as the #11 overall offensive tackle in the class. His length at 6-foot-7 is his biggest athletic attribute, as Ball is great at engaging blocks early and following through with leverage.

12. QB Thomas McVittie, Pittsburgh Panthers
Get your trumpets ready! McVittie is the only non-Tiger or Seminole in this class, giving Pittsburgh HC Pat Narduzzi an absolute coup for his offense going forward. Ranked as the #8 pro-style QB in the nation, McVittie's got the arm and the smarts to light scoreboards up early and often in his collegiate career.

11. DT Shavar Manuel, Florida State Seminoles
Manuel may be the biggest flip we saw on National Signing Day, as he crossed bounds in the Florida/Florida State rivalry by signing on with the Seminoles. He's not the longest or the biggest, but the #13 overall DT in the nation is one of the most explosive interior defensive linemen in the class.

10. WDE Xavier Kelly, Clemson Tigers
Inking Kelly is one of the reasons why Clemson defensive coordinator Brent Venables is the ACC Recruiter of the Year. The #7 weak-side defensive end in the nation, Kelly is a speed demon around the edge and is fantastic at recognizing and snuffing out offensive play calls.

8. QB Malik Henry, Florida State Seminoles
An early enrollee, Henry has been in the Florida State fold for a long time. Listed as the #53 overall player in the nation, Henry's got the speed and the smarts inside and outside of the pocket to lead the Seminoles offense to bigger and better things down the road.

7. OG John Simpson, Clemson Tigers
The #43 player in the nation, Simpson is one of the premier offensive guards in the class. While offensive tackles get most of the national recruiting press, a cornerstone guard like Simpson is essential for any elite offensive line.

6. ILB Tre Lamar, Clemson Tigers
Lamar is the total package. He's great against the run, fantastic as an interior pass rusher, and he has the field awareness to serve as a defensive quarterback. Ranked as the #37 player in the class, Lamar's going to be a do-it-all defensive standout for the Tigers.

5. WDE Brian Burns, Florida State Seminoles
Burns got lost in the shuffle with some of the big names atop the 2016 recruiting board, but the #22 overall player and #2 weak-side defensive end in the nation is as elite as they come. Once he bulks up in the weight room, he'll have some muscle and heft to complement his explosiveness off the edge.

4. OT Landon Dickerson, Florida State Seminoles
One of four overall Top 20 prospects in the conference, the #17 player and #5 offensive tackle in the nation is a complete tackle in every sense. He's the type of lineman who transforms an O-line by doing the little things well and overwhelming opponents with power and technique.

3. APB Tavien Feaster, Clemson Tigers
The best running back in the class and a legit home-run threat every time he touches the ball, Feaster clocks in as the #14 overall player in the nation. Give him an inch and he'll take 100 yards. Clemson's offense just got a military-grade ground weapon to play with.

2. CB Levonta Taylor, Florida State Seminoles
#11 overall in the nation and #1 among all cornerbacks, Taylor is a #1 shutdown cornerback who shadows receivers with ease. He's skilled off the line, but he's as elite as there comes in recognizing and jumping routes. Taylor is the 8th and final Seminole on this countdown.

1. DT Dexter Lawrence, Clemson Tigers
No Rashan Gary? No problem! Lawrence trails only Gary as the #2 defensive tackle and overall recruit in the class, but his 34 pounds of extra force and natural predilection for play-after-play dominance has us wondering if he'll usurp Gary's star by the end of his collegiate career.