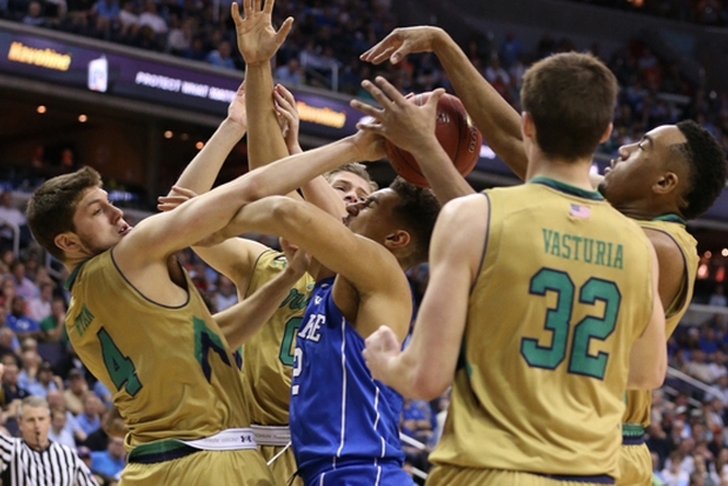 The ACC Tournament was expected to be premier conference tournament this season, and it hasn't disappointed to the point, providing us with a plethora of close and exciting games. Yesterday's quarterfinal games were certainly no exception, and they've set us up with two very exciting semifinal games tonight. In case you missed it, here's everything that happened yesterday - and what you can expect tonight:

QUARTERFINALS
(1) North Carolina Tar Heels 88, (8) Pitt Panthers 71
Pitt came out strong and held the lead for the first 19 minutes of the first half, but then UNC caught fire from the field and never looked back. The Heels shot 58.9 percent from the field in the game, led by guard Joel Berry's 20 points.

(4) Notre Dame Fighting Irish 84, (5) Duke Blue Devils 79
Duke was in total control of this game, holding a 64-48 lead with 10 minutes left in the second half, but Notre Dame would not go quietly into the night. Forward Zach Auguste (19 points, 22 rebounds) powered a giant comeback to force overtime, where the Irish won handily.

(2) Virginia Cavaliers 72, (10) Georgia Tech Yellow Jackets 52
Georgia Tech took advantage of Virginia's slow start to grab a 16-11 lead early in the first half, and Virginia only held a 30-28 lead at halftime. That all changed in the second half when UVA finally settled in defensively, holding GT to 41 percent shooting and forcing 14 turnovers.

(3) Miami Hurricanes 88, (6) Virginia Tech Hokies 82
Miami and Virginia Tech went back and forth throughout most of the game until the start of the second half, when Miami reeled off a 15-2 run (led by 11 straight points from guard Angel Rodriguez) to finally take control.

SEMIFINALS
(1) North Carolina Tar Heels vs. (4) Notre Dame Fighting Irish - 7:00 pm ET, ESPN
Notre Dame beat North Carolina 80-76 in South Bend in their last matchup on Feb. 6, but a lot has changed since then. The Irish are 5-3 since that loss, while UNC is 7-2, including wins over Miami and Duke. With a win, Notre Dame can become the first team to win six of their last seven games against North Carolina and Duke since NC State did it in the early 1970's.

(2) Virginia Cavaliers vs. (3) Miami Hurricanes - 9:30 pm ET, ESPN
These two sides split the season series, with each winning on their home court. Both teams have also been successful against ranked teams, with Virginia going 6-1 (lone loss to Miami) and the 'Canes going 5-2. Miami is looking to get to the ACC Tournament Finals for the first time since winning it in 2013, which Virginia is trying to do the same for the first time since they won it in 2014.