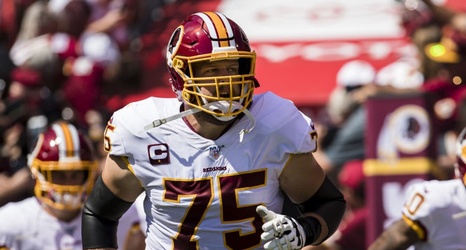 LANDOVER, MD - SEPTEMBER 15: Brandon Scherff #75 of the Washington football team takes the field before the game against the Dallas Cowboys at FedExField on September 15, 2019 in Landover, Maryland. (Photo by Scott Taetsch/Getty Images)

One of the key storylines surrounding the Washington Football Team this offseason was the fate of stalwart right guard Brandon Scherff.

The Washington Football Team originally selected Brandon Scherff as a tackle out of Iowa. He was selected with the No. 5 overall pick in the 2015 NFL Draft. Back then, Jay Gruden was still waiting for his first and only division championship, and Kirk Cousins, who was still on his rookie contract, hadn’t yet earned the starting quarterback job.