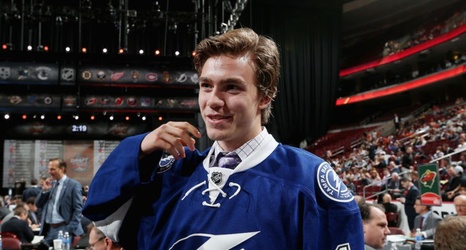 PHILADELPHIA, PA - JUNE 28: Brayden Point meets his team after being drafted #79 by the Tampa Bay Lightning on Day Two of the 2014 NHL Draft at the Wells Fargo Center on June 28, 2014 in Philadelphia, Pennsylvania. (Photo by Bruce Bennett/Getty Images)

Even though the Tampa Bay Lightning don’t have a first round pick due to the trades for Blake Coleman and Barclay Goodrow, the NHL Draft still gets underway tonight with the first round. Beginning tomorrow at 11:30 a.m., the draft will continue where the Lightning have eight picks throughout the day beginning with the last pick in the second round.