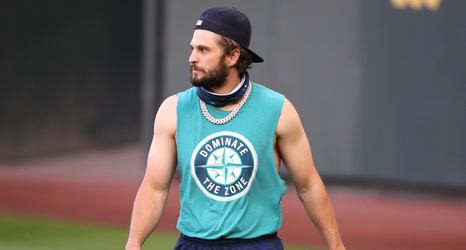 SEATTLE, WASHINGTON - AUGUST 02: Kendall Graveman of the Seattle Mariners pitches against the Oakland Athletics during their game at T-Mobile Park. (Photo by Abbie Parr/Getty Images)

The 29-year-old pitcher became a free agent after the World Series was complete, but Jerry Dipoto moved swiftly to re-sign Kendall Graveman to a contract. Dipoto gave Graveman a chance by signing him in 2019 after coming off of Tommy John Surgery. Graveman signed a one-year $1.25 million contract with almost double the amount of incentives.