'Always respectful, fair and honest!': Mesut Ozil sends a pointed birthday message to Arsene Wenger - just 24 hours after he ripped into the 'disloyalty' of Arsenal's new regime under Mikel Arteta 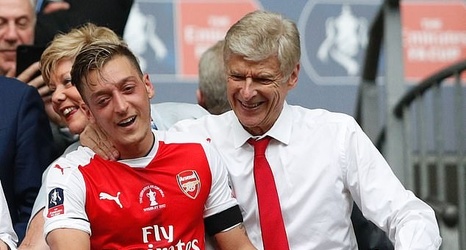 Mesut Ozil praised former manager Arsene Wenger on his 71st birthday for 'always being respectful, fair and honest' just 24 hours after slamming the current Arsenal regime for a lack of loyalty.

The German midfielder was embarrassingly left out of Arsenal's 25-man Premier League squad this week which follows his omission from the club's Europa League squad earlier this month.

It means Ozil, who is on a £350,000-a-week contract, is likely to never feature for Arsenal again and the 31-year-old took a swipe at the current Gunners hierarchy on Wednesday for not showing him enough 'loyalty and allegiance'.