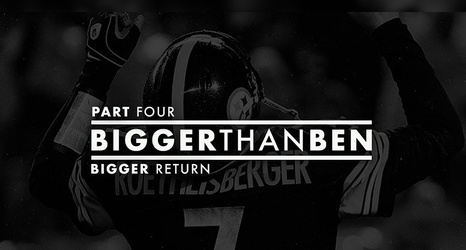 The great video docuseries about Pittsburgh Steelers quarterback Ben Roethlisberger and his recovery from the serious elbow injury that he suffered early during the 2019 season wraps up on on this Wednesday, September 16th, with part four of “Bigger Than Ben.” This docuseries is produced by Mango Dragon Productions and it can be viewed on YouTube.

Part Four begins with descriptions about Roethlisberger’s competitive nature. After that, the final stages of Roethlisberger’s rehab are shown and that includes him throwing his first NFL pass to a few teammates at a local high school. That’s followed up by Roethlisbeger’s infamous trip to the barbershop to get his beard cut.