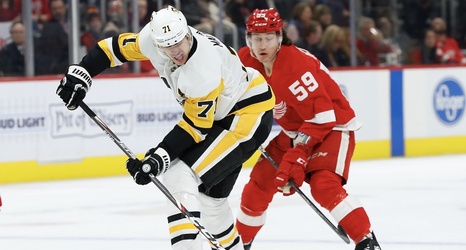 DETROIT -- Evgeni Malkin and Jake Guentzel have been playing well together since Sidney Crosby has been out of the Penguins' lineup, but they were on another level on Saturday night.

Malkin and Guentzel each recorded a goal and two assists as the Penguins went on to defeat the Red Wings 5-3 here at Little Caesars Arena.

Guentzel opened the scoring 5:37 into the game with his 16th goal of the season, assisted by Kris Letang and Malkin:

Malkin scored midway through the second period, his eighth goal of the season and the 399th of his career, set up by Guentzel and Chad Ruhwedel: