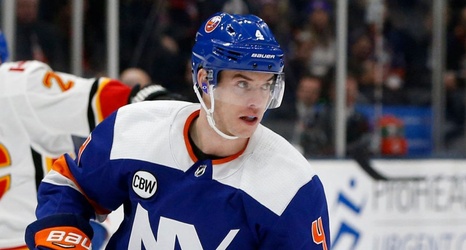 Thomas Hickey of the Islanders skates during the first period against the Calgary Flames at NYCB Live's Nassau Coliseum on Feb. 26. Photo Credit: Jim McIsaac

PHILADELPHIA — Thomas Hickey leaned into the slap shot from the left point and the puck navigated its way through traffic before trickling through the pads of Flyers goalie Brian Elliott for the Islanders’ first goal of the preseason.

But the harsh reality is he may not secure a regular spot in the lineup regardless of how well he plays in the preseason. He ended last season as the seventh defenseman after a head injury sidelined him Dec.