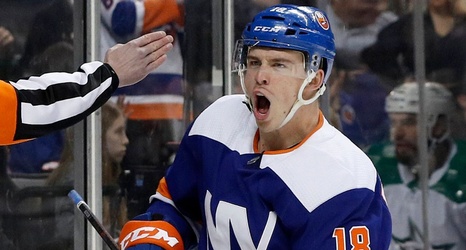 Anthony Beauvillier of the Islanders celebrates his first period goal against the Stars at Barclays Center on Tuesday. Credit: Jim McIsaac

The Islanders’ power play struggled right to the end. It even needed two goals on the final man advantage to get one to count.

But it was enough to eventually earn the Islanders a crucial 4-3 overtime win over the Stars on Tuesday night at Barclays Center.

Anthony Beauvillier’s second goal of the game, a breakaway off a turnover, won it at 2:52 of overtime for the Islanders (30-15-6).

The Islanders were 1-for-5 on the power play with 13 shots.