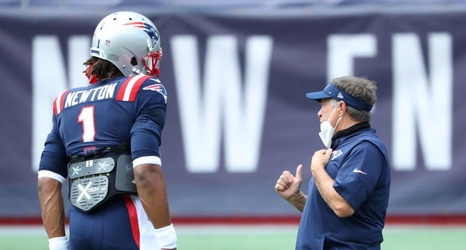 Cam Newton #1 of the New England Patriots talks with head coach Bill Belichick before the game against the Miami Dolphins at Gillette Stadium on September 13, 2020 in Foxborough, Massachusetts. (Photo by Maddie Meyer/Getty Images)

Patriots fans nervous as to what the offense would look like with Cam Newton under center surely had their concerns quelled after his surgical showing in Week 1 against Miami. It’s clear that offensive coordinator Josh McDaniels catered the system almost exclusively to the three-time Pro Bowler’s mobility.