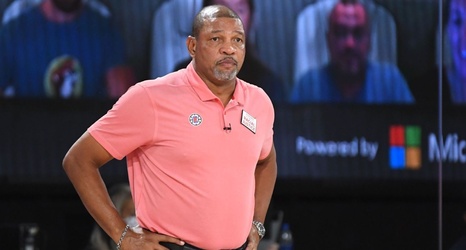 Half of Doc Rivers' LA Clippers polo shirt was soaked like he had just come off the Splash Mountain water ride at Walt Disney World.

After passing Red Auerbach for 11th on the all-time wins list with a 126-103 win over the New Orleans Pelicans, Rivers was doused with water by Clippers players and staff members in celebration of his 939th career victory.

The former Boston Celtics head coach said he wasn't aware that he had passed the Celtics legendary coach until he walked into the victorious locker room at the HP Field House at the Walt Disney World Resort's ESPN Sports Complex.