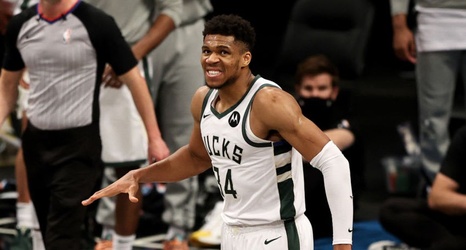 NEW YORK, NEW YORK - JUNE 15: Giannis Antetokounmpo #34 of the Milwaukee Bucks reacts after he was called for a foul in the fourth quarter against the Brooklyn Nets during game 5 of the Eastern Conference second round at Barclays Center on June 15, 2021 in the Brooklyn borough of New York City. NOTE TO USER: User expressly acknowledges and agrees that, by downloading and or using this photograph, User is consenting to the terms and conditions of the Getty Images License Agreement. (Photo by Elsa/Getty Images)

Since his rise to stardom with the Milwaukee Bucks, five-time All-Star Giannis Antetokounmpo has proven to be one of the most complex superstars in the NBA.