Report: There is ‘rising buzz in coaching circles’ about Frank Vogel’s job security 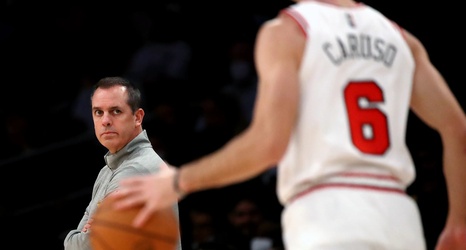 Despite his name trending on Twitter after basically every single loss this season, heading into Thanksgiving weekend with the Lakers at 10-10 overall and in seventh place in the Western Conference, there had been no credible reports that Frank Vogel was on the hot seat. There have been lots of criticisms of his lineups and other decisions, sure, but no real reports or whispers that his job was in jeopardy.

At least until now. Because on Black Friday, Hall-of-Famer and longtime NBA insider Marc Stein reported in his must-subscribe independent Substack newsletter that there is “rising buzz” around the league that Vogel could be scapegoated if the Lakers continue to struggle:

There is also rising buzz in coaching circles about the pressure mounting on Frank Vogel given the Lakers’ worrisome 10-10 start … given L.