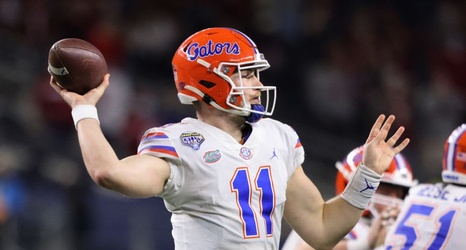 ARLINGTON, TEXAS - DECEMBER 30: Quarterback Kyle Trask #11 of the Florida Gators throws against the Oklahoma Sooners during the second quarter at AT&T Stadium on December 30, 2020 in Arlington, Texas. (Photo by Ronald Martinez/Getty Images)

Former Florida Gators quarterback Kyle Trask has not been a hot name this draft season. A large part of that was his last collegiate game was a disaster. Trask threw three interceptions and looked like a true freshman instead of a Heisman finalist.

However, something has changed in the media circles, and Trask has become one of the hottest names out there.