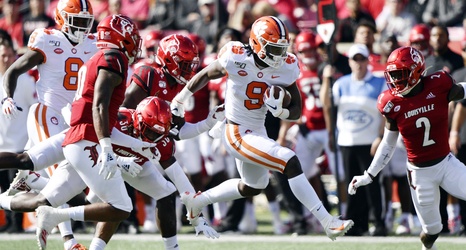 LOUISVILLE, Ky. — After rushing for 127 yards against Florida State a week ago, Travis Etienne kept things rolling and had an even bigger day on the ground in second-ranked Clemson’s 45-10 win over Louisville at Cardinal Stadium on Saturday.

The junior running back racked up 192 yards on 14 attempts, an average of 13.7 yards per carry, and found the end zone on a 49-yard rushing touchdown.

The touchdown essentially put the dagger in the game, extending Clemson’s lead to 24-3 with 34 seconds remaining in the third quarter.

The Cardinals could not contain Etienne from the start, as he broke free for a 48-yard run on Clemson’s first play from scrimmage to help set up the first score of the game, a 51-yard field goal by B.