The Morning After Winnipeg: The Points Streak Is Snapped As Calgary Falls To Winnipeg 4-2 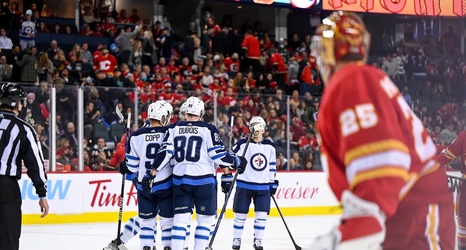 It wasn’t the prettiest game after the Flames jumped out to a 2-0 lead on goals by Matthew Tkachuk and Elias Lindholm as the Calgary fell to Winnipeg 4-2 last night. Winnipeg and Connor Hellebuyck settled in after that two goal outburst and shut the Flames down, scoring four unanswered goals to snap their five game losing streak. Kyle Connor led the Jets comeback with two goals on the night and after giving up two first period tallies, Hellebuyck stopped the next 34 shots to keep the Flames off the board and out of the win column.

-No More Points: The Flames regulation loss meant no points for the Flames last night.